Our time in Andalusia was book-ended by a slow start at the villa in the Sierra Morena mountains, and a slow finish in Sevilla (which ended up even slower with the aforementioned flight cancellation and two day delay getting home!) In between, we’d spend two nights in each of three key cities – Cordoba, Granada, and Malaga. We’d thought about squeezing in Barcelona and Madrid, Valencia, too. But in the end, experience won out, focusing on what might be warmer, sunnier weather, and the wish to take our time, and sink a bit deeper into this region.

I’d made a day trip to Cordoba from Sevilla during the dog days of late summer in 2017. I remembered the “mile high” Spanish omelette at the corner tapas bar outside the walls of La Mezquita. I remembered what appeared an optical illusion, but wasn’t, of those eight hundred plus striped stone pillars inside this UNESCO World Heritage site. The awe-inspiring beauty of Moorish architecture, first seen in the mosques of Istanbul, the domed starry ceiling and intricate stone carved walls. The artisans hand tooling leather. Blue potted, flower adorned walls of Callejas de Las Flores, evoking the “Blue Pearl City” of Chefchaouen in Morocco. I remembered and wanted to see it anew with my partner.

subdued luxury secreted behind the latched and locked iron gate
what was once a medieval convent, now a quiet respite of ten rooms on three floors

steps away, down the cobble-stoned calle
La Mezquita’s thick walls command attention
her inner courtyard filled with stone and sunshine
her hallowed halls, an infinity of striped pillars, an optical illusion or is it?
her bell tower anchors the prime piece of real estate
as it has for centuries

statues ablaze in gold gilt and blue and crimson
angels and king, virgin and saints
images fixed in time by time and the artisan’s skill

herons stand graceful guard in the silt islets of the Guadalquivir
that once mighty river made cities along its shores rich and mighty –
Cordoba, Sevilla, Cadiz
the still standing roman bridge spans old and new towns
we make our way midway, sit in the afternoon sun,
watch people, listen to senor playing his accordion

a morning to view paintings from the past and near present
we have the gallery to ourselves, take our quiet time
the gift of rising early, of being first to enjoy the splendid spread of breakfast
walk past plazas and through neighborhoods
a quick stop at a notion store to purchase a small length of lace
to evoke the flamenco mantilla and shawl

mid afternoon tapas on the street corner up from the river
fino warm, sunshine hot, lunch a forgettable, overdone crusted roll of ham
later dinner on the balcony
the remarkable night view of the golden lit La Mezquita and her bell tower
a chance shooting star
a flamenco guitarist serenades from under the resident orange tree
dinner an unremarkable, overdone grilled shrimp

but after all, it was never about the dinner 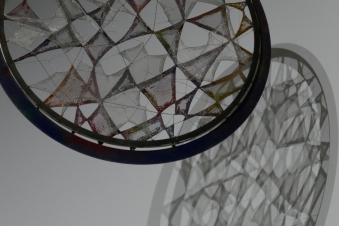 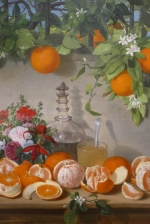 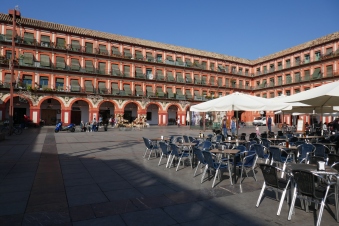 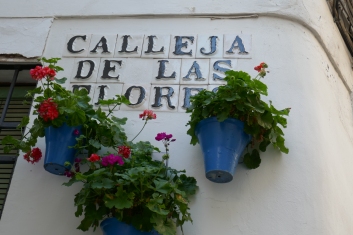 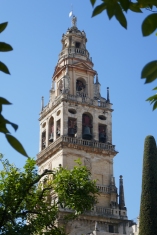 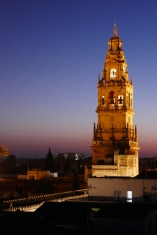 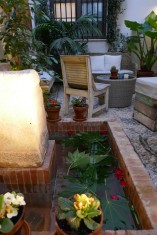 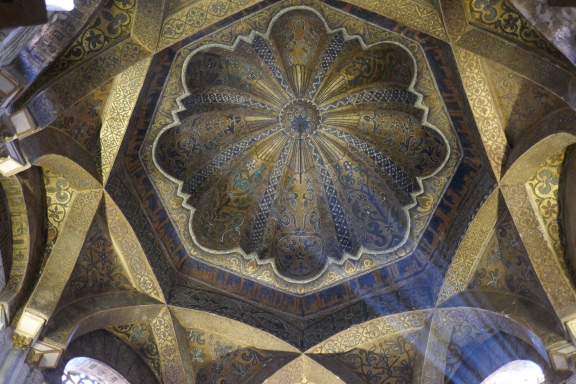 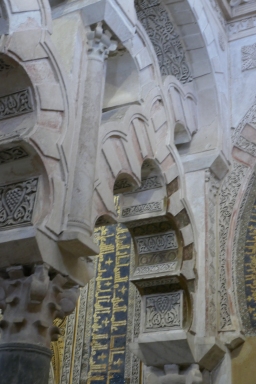 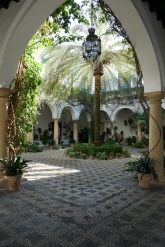 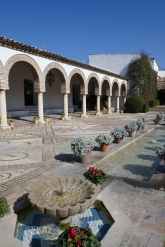 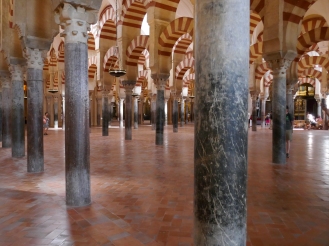 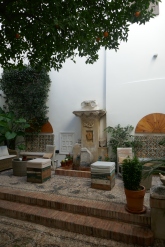